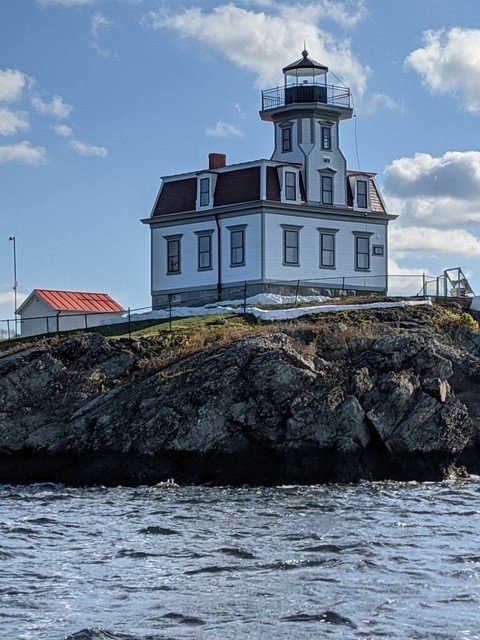 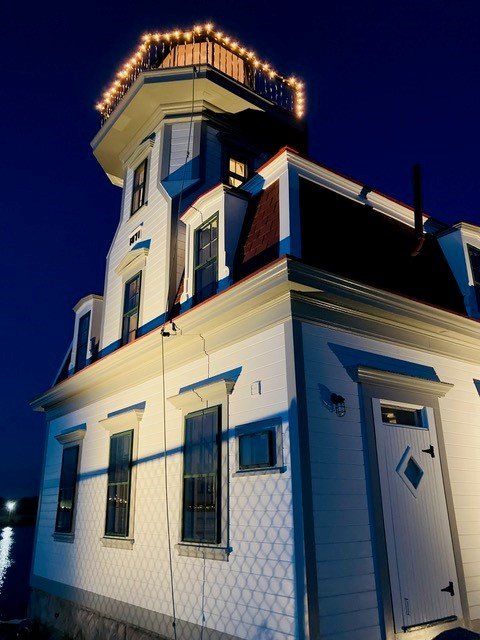 The year-long celebration leading up to the 150th anniversary of Pomham Rocks Lighthouse in Riverside came to a close recently. December 1, 1871 was the official first lighting of the lamp in the beacon that still guides mariners in upper Narragansett Bay.

Throughout the year, Friends of Pomham Rocks Lighthouse sponsored events to focus the attention of the community on the importance of preserving this historical landmark. Early in the year, a photo/art contest was held. Winning entries were displayed at four local sites. More than 200 people participated in a 5K/10K benefit run/walk through Riverside. Educational displays and lighthouse merchandise were offered at The Looff Arts Festival. Pomham’s 4th order Fresnel lens was returned from the Custom House Maritime Museum in Newburyport, MA. The antique lens was restored, reunited with its original pedestal, and placed on a specially designed platform as the centerpiece of the lighthouse museum’s exhibits. Repairs were made to the exterior of the lighthouse and the lantern room, and the entire building and oil house were painted in their original 1871 colors. While removing an unused oil tank on the north side of the island, original stone retaining walls were unearthed, restored and painted in their original white color. Members gathered at the annual meeting and saw a visual presentation of the year’s accomplishments.

At sunset on December 1, board members of the Friends took a boat ride to the lighthouse to witness the beacon turn on, marking Pomham’s official 150th birthday. They dedicated the celebration to the keepers and their families who kept the light burning for more than a century: Captain C.H. Salisbury and his wife, Mary, who tended the light for 22 years; Nathaniel Dodge, who spent five years at Pomham Rocks; Thomas Fishburne, who committed ten years as keeper; Adolph Aronson, who dedicated 29 years with his wife Nellie and three children; William Howard, who kept the light with his wife and son for 14 years; Howard Beebe, who spent five years as the last civilian lightkeeper; and all the Coast Guardsmen who carried out their duties at the light station, including, Dennis Tardiff, current chair of the board of Friends of Pomham Rocks Lighthouse.

The board of the Friends concluded their ceremony with the following tribute: “To all who committed themselves to watching the light and to all the modern-day keepers who support the preservation of Pomham Rocks Lighthouse today, we dedicate this lighting to you in the hope that future generations will continue to keep this good light shining as a symbol of hope and perseverance.”

Jeremy D’Entremont, author, photographer and historian for the American Lighthouse Foundation and the United States Lighthouse Society, produced a video to commemorate Pomham’s 150-year history. The documentary can be viewed on youtube by clicking on the following link: Happy 150th birthday, Pomham Rocks Lighthouse!


The Friends of Pomham Rocks Lighthouse is a 501(c)(3) non-profit volunteer chapter of the American Lighthouse Foundation. All proceeds support efforts to maintain this important New England maritime light station and museum that is an integral part of Rhode Island’s heritage and that is listed in the National Register of Historic Places. Support and new members are always welcome. Visit us at www.pomhamrockslighthouse.org.