A Celebration of Music & the Environment at Slater Mill 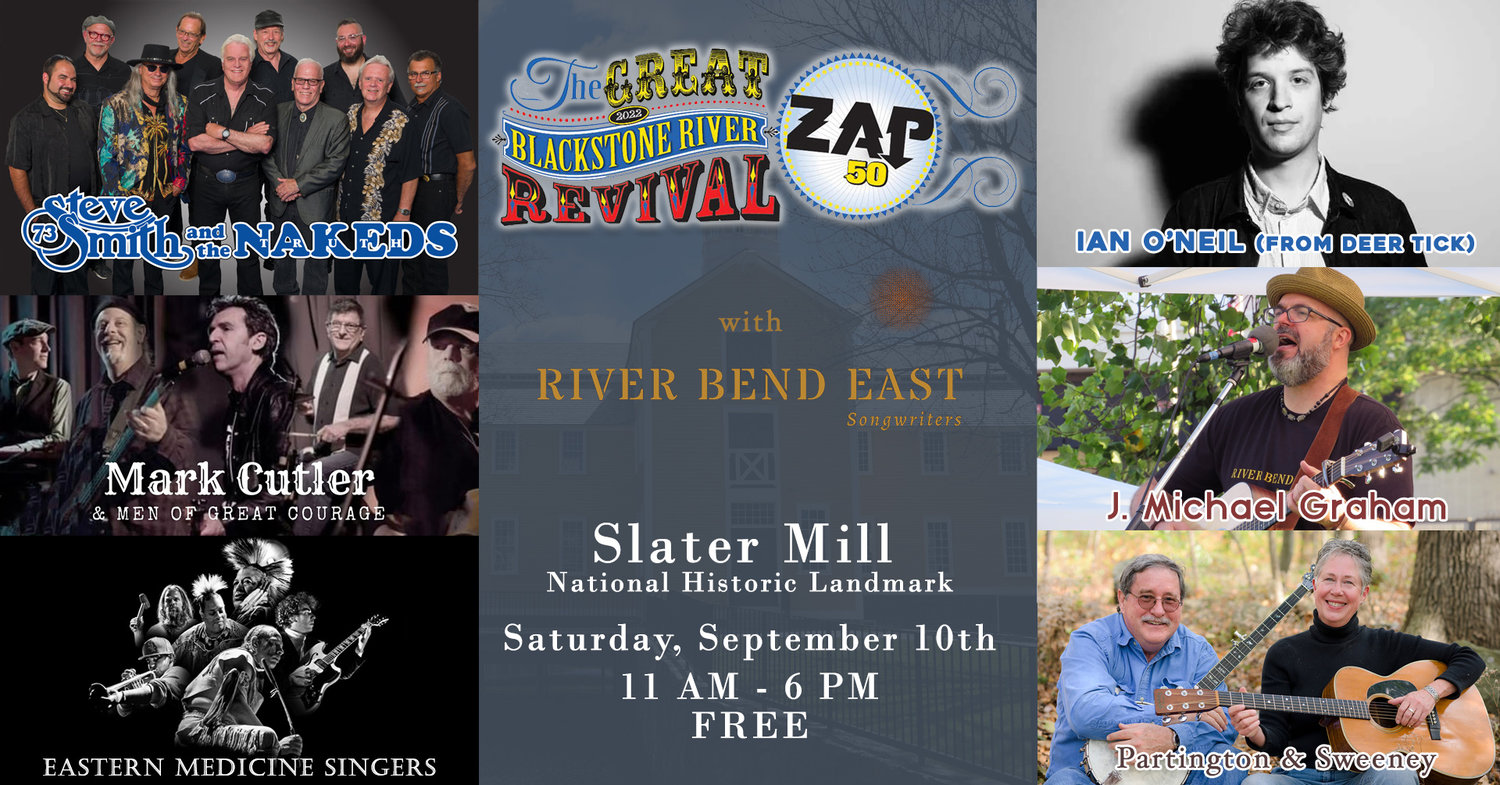 (Pawtucket, RI) - Just like rivers themselves, entities converge to create something powerful. That is the case with Blackstone River Revival ZAP 50 Celebration with River Bend East songwriters which is being held outside of Slater Mill, 67 Roosevelt Ave., Pawtucket on September 10th from 11 AM to 6 PM. Admission is free.

50 years ago 10,000 people came together to clean the banks of the Blackstone River with a celebration that evening (Sept. 9th, 1972) that included a performance by the legendary Pete Seeger. A wonderful way to honor that work is with a clean up of the same scale around Blackstone Valley and some great songwriting. James Toomey, the director of Marketing for Blackstone Valley Tourism Council adds "the large number of people that dedicate so much time and energy into making our region beautiful really needs to be recognized and the 50th anniversary of ZAP is the perfect opportunity." Mr. Toomey continues, "all of us at Blackstone Valley Tourism are happy to be one of the many groups organizing ZAP 50 and we're excited to work with River Bend East on this collaborative event."

Now in its fourth year, River Bend East continues to highlight the regional songwriting talent found in Southern New England. At this year’s event they will feature folk acts Ian O’Neil from Deer Tick, J. Michael Graham, and Partington & Sweeney. River Bend East Founder and Music Director, J. Michael Graham states, “we stand on the shoulders of the environmental activists who have come before. This year, River Bend East will commemorate Pete Seeger who performed at the original ZAP cleanup 50 years ago.”

The musical program that day continues with Eastern Medicine Singers, Mark Cutler & the Men of Great Courage, and Steve Smith & The Nakeds. This is a star-studded portion of the event with an acclaimed Algonquin drum group and two Rhode Island Music Hall of Fame inductees.

In between performances there will be recognitions of the numerous environmental stewards that have all worked so hard to have a positive impact on the health of our beloved Blackstone River and its watershed. This includes many families, organized groups and nonprofits, and all of the individuals that will have taken part in the ZAP 50 clean up / green up held across the entire Blackstone Valley region on Saturday, August 27th.

In addition to this full-day music event on Sept 10th, River Bend East is also hosting a songwriting workshop with award-winning songwriter, Mark Cutler of The Same Thing Project, on Thursday September 8th from 6:30 - 8 PM on site at Slater Mill.