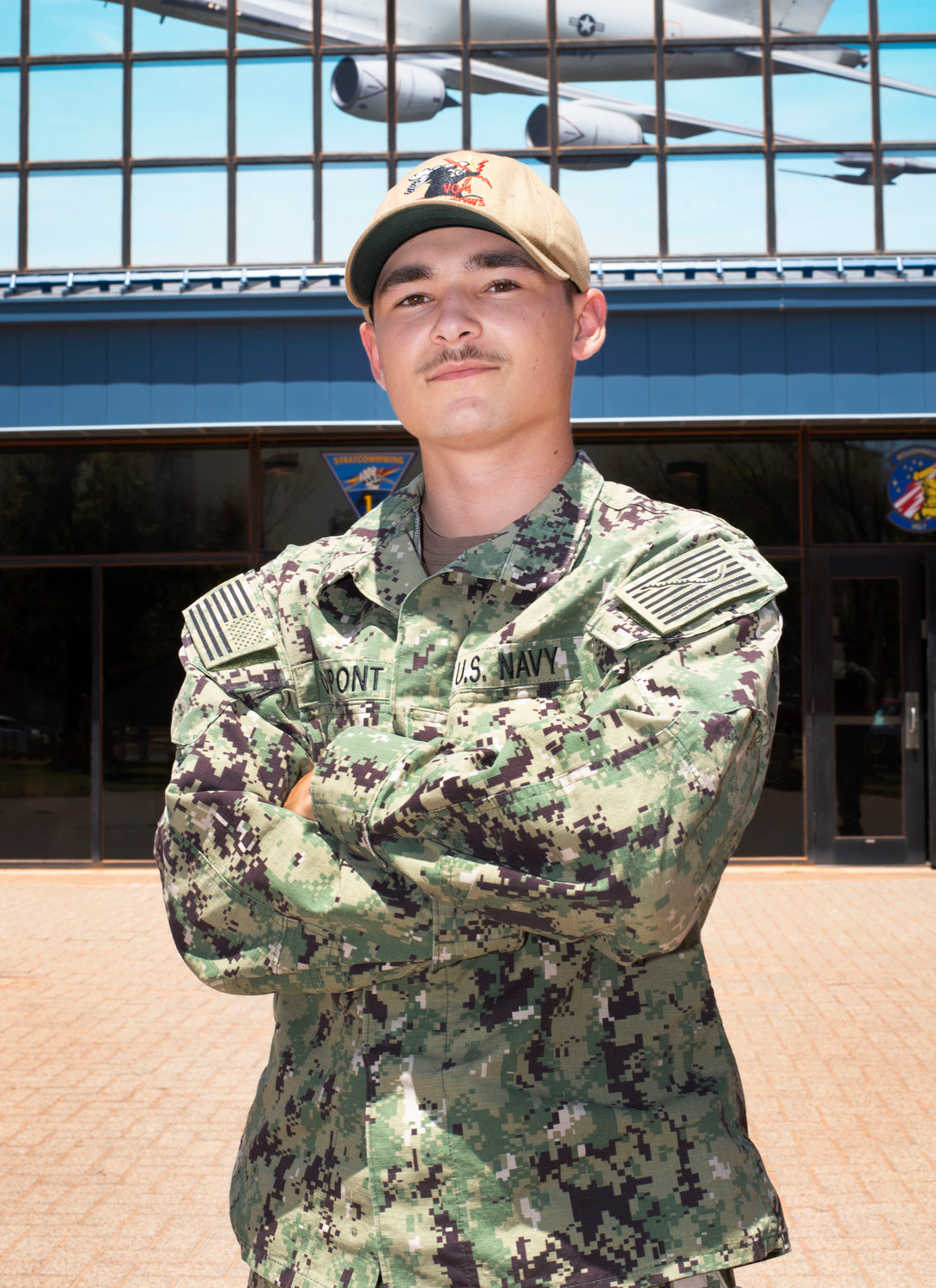 TINKER AIR FORCE BASE, Okla. - A Seekonk, Massachusetts, native is serving in the U.S. Navy as part of the nation’s nuclear deterrence mission at Strategic Communications Wing One (STRATCOMMWING ONE). Its TACAMO ("Take Charge and Move Out") mission provides airborne communication links to nuclear missile units of U.S. Strategic Command.

“I joined the Navy because I wanted to take a different route than the traditional high school to college track,” said Dupont. "I also knew the Navy could help give me a better future."

Dupont uses skills and values similar to those found in Seekonk to succeed in the Navy.

“The job I had in my hometown prior to joining the Navy taught me the importance of a strong work ethic,” said Dupont.

The Navy's presence aboard an Air Force base in the middle of America may seem like an odd location given its distance from any ocean; however, the central location allows for the deployment of aircraft to both coasts and the Gulf of Mexico on a moment’s notice. This quick response is key to the success of the nuclear deterrence mission.

The Navy command consists of a Wing staff, the Center for Naval Aviation Technical Training, and three Fleet Air Reconnaissance Squadrons: The "Ironmen" of VQ 3, the "Shadows" of VQ 4 and the “Roughnecks” of VQ 7.

Dupont serves as an aviation electronics technician with VQ 4.

“My favorite thing about my job is getting to learn about things that will help me get a job when I leave the Navy,” said Dupont.

STRATCOMMWING One employs more than 1,300 active-duty sailors and 100 contractors to provide maintenance, security, operations, administration, training and logistic support for the Boeing E-6 Mercury aircraft fleet, an airborne command post and communications relay based on the Boeing 707.

Their mission stems from the original 1961 Cold War order known as ‘Take Charge and Move Out!’ Adapted as TACAMO and now the command’s nickname, the men and women of TACAMO continue to provide a survivable communication link between national decision makers and the nation’s nuclear weapons.

The commander-in-chief issues orders to members of the military who operate nuclear weapons aboard submarines, aircraft or in land-based missile silos. Sailors aboard TACAMO E-6 Mercury aircraft provide the one-of-a-kind and most-survivable communication needed for this critical mission.

With more than 90 percent of all trade traveling by sea, and 95 percent of the world’s international phone and internet traffic carried through fiber optic cables lying on the ocean floor, Navy officials continue to emphasize that the prosperity and security of the United States is directly linked to a strong and ready Navy.

Serving in the Navy means Dupont is part of a team that is taking on new importance in America’s focus on rebuilding military readiness, strengthening alliances and reforming business practices in support of the National Defense Strategy.

“The Navy contributes to the National Defense Strategy because we can be anywhere at any time,” said Dupont.

Dupont and the sailors they serve with have many opportunities to achieve accomplishments during their military service.

“My proudest Navy accomplishment was getting to this command,” said Dupont. "This is a really important command when it comes to the Navy. Previously, it wasn't offered to anyone who had not been in for a while, so I'm proud to be here after less than two years."

As Dupont and other sailors continue to perform missions, they take pride in serving their country in the United States Navy.

“Serving in the Navy is a huge accomplishment,” said Dupont. "It makes me proud that I can do something a lot of people don't choose to do.”

Dupont is grateful for those that have made the Navy journey possible.

“I appreciate my family for supporting me this far,” added Dupont. “Thank you, everyone.”