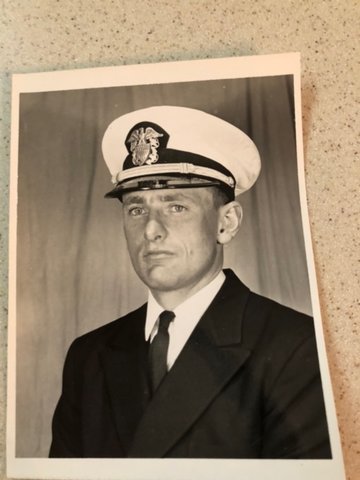 Please run in the Rehoboth Reporter with Photograph & Flag

Ernest Lamond Goff known as Lamie passed May 5, 2022 from AML cancer. Ernie grew up in Rehoboth Massachusetts on a New England dairy farm with his mother Dorothy a school teacher and his father Ernest Goff a dairy man and his disabled brother David and his cousin Billy.

He graduated from East Providence High School and later went to Dartmouth College (‘61) on an ROTC full scholarship. He served in the Navy as a ship officer.  He also graduated from Naval Justice School in Newport RI.

He opened his own law practice in Brockton MA where he focused largely on disability law and personal injury cases. Early on in his practice he barely survived spinal meningitis at Brockton VA and then with fortitude reopened his law practice.

In 1993 he met Cindy Jablecki Bryden and later married.

Together they retired in Huntsville, Utah in 2004. Ernie was an avid ski enthusiast, kayaker, hiker, biker and loved nature.

In 2014 they got a second home in Cannon Beach OR where they both worked together at Haystack Rock protecting marine life, seabirds and other wildlife. Ernie became one with all the seabirds and often took flight with them.

A graveside Memorial will take place at Rehoboth Village Cemetery in MA on 6/2 at 2PM.  All family and friends will be welcomed.

Memorial donations can be given to HRAP Haystack Rock Awareness Program designated for Education Resources C/O Lisa  Habecker Education and Volunteer Coordinator in Cannon Beach OR 97110.