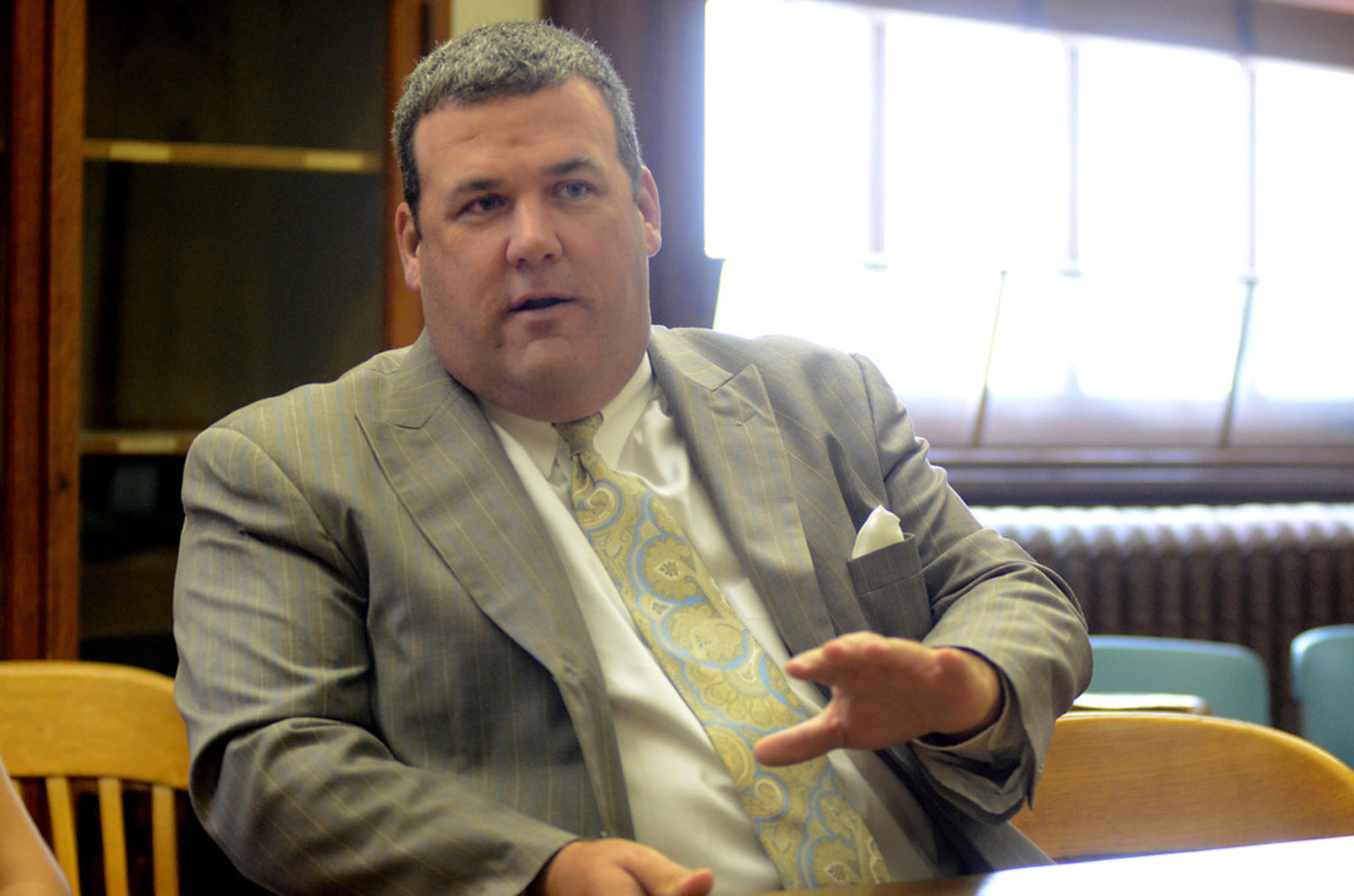 “I have spent the vast majority of my adult life here at East Providence High School, first as a Government, History and Civics teacher and coach, and more recently as the city’s Athletic Director,” stated Amore. “My passion for teaching is deeply connected to the subject I taught. To educate students about our collective history and show them how to engage in the government process has been a labor of love. In my role as State Representative, I am particularly proud of the successful school construction bond legislation – which culminated in the overwhelming passage of a statewide bond referendum and many accompanying local bond questions, including the one to build the new East Providence High School. This is a shining example of civic engagement leading to good policy and tremendous public support.”

Amore continued, “My passion for and experience in civic engagement and government, my heartfelt belief in public service, instilled in me by my parents, and a deep reverence for the protection of the most fundamental right in our democracy – the right to vote – has brought me here today, among my family, friends, students and colleagues, to officially announce my candidacy to be Rhode Island’s next Secretary of State. I believe my background and life experiences have uniquely prepared me for this job, at a time when voting rights across the country have come under attack. As a Government, History and Civics teacher, I understand the importance of ensuring an open, accessible, safe and secure electoral process – and as your Secretary of State, this will be my top priority. In 2020, we saw a record number of votes cast in a safe, secure manner. This is how it should be – and I will work to expand on this progress. I will also heavily promote Civics Education for educators and the general public, so everyone can truly understand how state government works. I will fight to keep government open, and ensure government officials and lobbyists are transparent, honest, and accountable. And I will ensure a smooth process for those with a vision and a dream to start and maintain a business in Rhode Island. I plan to use this office to make life better for all Rhode Islanders.”

Rhode Island Speaker of the House Joe Shekarchi stated, “Gregg has a deep understanding of history and state government, he’s a great communicator, and he’s not afraid to make tough decisions. During a time in our history when voting rights are coming under attack across the country, Gregg is exactly who we need to stand strong and ensure all Rhode Islanders have a fair shot to vote.”

“As a fellow high school teacher, I have seen Gregg in action in the classroom, and he has a natural way of not just teaching concepts, but inspiring students as well,” stated State Senator Valarie Lawson (Democrat, District 14, East Providence.) “We currently live in a time where the entire electoral process has come under attack. I’m supporting Gregg because he knows this process inside and out – and will make it a top priority to ensure safe, secure elections and expanded access to the voting booth.”

State Representative Katherine Kazarian (Democrat, District 63, East Providence) stated, “Not only is Gregg extremely qualified to ensure our electoral process is safe, secure, and available to everyone who wants to participate, but he’s also committed to helping ensure business owners can easily start and maintain a business in Rhode Island. He understands that small businesses are the lifeblood of our economy and help drive the middle class, and will do everything he can to further their mission. Gregg has dedicated his life to public service, and I have no doubt he is the right person for this job at this moment in time.”

Representative Karen Alzate (Democrat, District 58, Pawtucket) said, “Gregg is the lead sponsor of the Let RI Vote Act, which will make permanent the expanded access to voting that we saw during the pandemic. I represent a District that benefited greatly from this expanded access, and I’m supporting him because I know he’ll make it a top priority to push forward this proposal to expand voting, and make certain that it’s done in a way that keeps our elections safe.”

Amore concluded, “The 2020 election shined a bright spotlight on Secretaries of State across the nation, and a handful of them in battleground states stood firm in the face of intense political pressure, hyper partisan attacks, and in far too many cases, threats of violence. This job requires a steady hand and the ability to set party politics aside and withstand partisan pressure. It requires the ability to communicate clearly with the public on how our elections are conducted and certified. These men and women proved themselves to be true public servants who placed their country above their party and simply did the job they were elected to do. I believe that in my years in the classroom, as a community volunteer, as an administrator, and in my time in the General Assembly, I have proven myself similarly to be a steady hand – a thoughtful and measured voice, a clear communicator, and a duty-bound public servant – and that’s why I’m running to be your next Secretary of State.”

In 2019, Chairman Amore was the sponsor of a major public education reform law that increased building-level management of schools. He also was a cosponsor of a new law that will protect student loan borrowers and establish oversight of student loan servicers operating in Rhode Island.

He played a key role in the passage of the FY 2019 budget article containing historic school construction bond assistance. He sponsored the bill placing the East Providence High School construction project on the ballot, and following voter approval, the state is now providing up to 70% reimbursement for the state-of-the-art facility.

Amore has twice been named Mothers Against Drunk Driving Rhode Island Legislator of the Year for his efforts regarding legislation aimed at curbing drunk driving in Rhode Island.

Born on Oct. 28, 1966, Representative Amore graduated from East Providence High School in 1984 before continuing his education at Providence College, where he earned a bachelor’s degree in history in 1988. In 2010, he earned a master’s degree in public policy from New England College.

In addition to his duties as a legislator, Representative Amore is the athletic director for the East Providence School Department after a long teaching career at East Providence High School. In 2008, Representative Amore was recognized as the Rhode Island History Teacher of the Year by the Daughters of the American Revolution. He had a long collegiate and high school coaching career in both hockey and baseball.  He served as the head baseball coach at the Naval Academy Prep School in Newport, RI, LaSalle Academy and East Providence High School. He also served as the hitting coach for the Providence College Friars baseball team in the early 1990s.

He was honored by the Rhode Island Athletic Trainers’ Association with the group’s 2019 Frank Murgo Service Award for his educational efforts and dedicated service to the athletes and athletic trainers of Rhode Island.

Representative Amore resides in East Providence with his wife, Lee (Smith), and their two daughters, Tess, a senior studying Political Science at American University in Washington DC, and Megan, a freshman studying Communications at Manhattan College in NYC.

Senator Cynthia Mendes, a political newcomer, announced her candidacy for Lieutenant Governor.  Mendes is running on a ticket with former Rhode Island Secretary of State Matt Brown, who is seeking the governorship.  According to their public statement, the pair enter the race with backing from the Sunrise Movement, the youth-led climate organization that has played a pivotal role in electing progressive leaders across the nation. Once in office, they have promised to enact sweeping climate legislation to put Rhode Island on track to become the first state to achieve net-zero emissions. They are also committed to passing universal healthcare, restricting the influence of corporate lobbyists, funding large scale investments in green affordable housing, and implementing a wide-ranging series of racial justice policies which include ending mass incarceration and shutting down corporate polluters in frontline communities across the state.

Sen. Mendes and Mr. Brown, seeking the Democratic nomination for their respective posts, are running along with 50 progressive candidates for state and local office with the endorsement of the Rhode Island Political Cooperative. Ten candidates, including Sen. Mendes (D-Dist. 18) and State Representative Brianna Henries (D-Dist. 64, East Providence), were elected under the banner of the collaborative in 2020.

Mr. Brown served as Rhode Island’s Secretary of State from 2003 to 2007.  Said Mr. Brown, “Rhode Island has been run by the same corrupt political machine for decades, but it doesn’t have to be. We have a once-in-a-generation opportunity to replace our entire state government in a single day and usher in an era of transparent, progressive, effective government that works for all Rhode Islanders. That’s why I’m running for Governor—and not alone, but alongside Cynthia Mendes and an incredible team of progressive candidates all across the state. Together, and only together, we can make our state work for all Rhode Islanders, the way it always should have.”  The candidates also pledge the following: No Corporate PAC Donations; No Corporate Lobbyist Donations; No Fossil Fuel Donations.