Prescribing the Watershed of the Palmer River 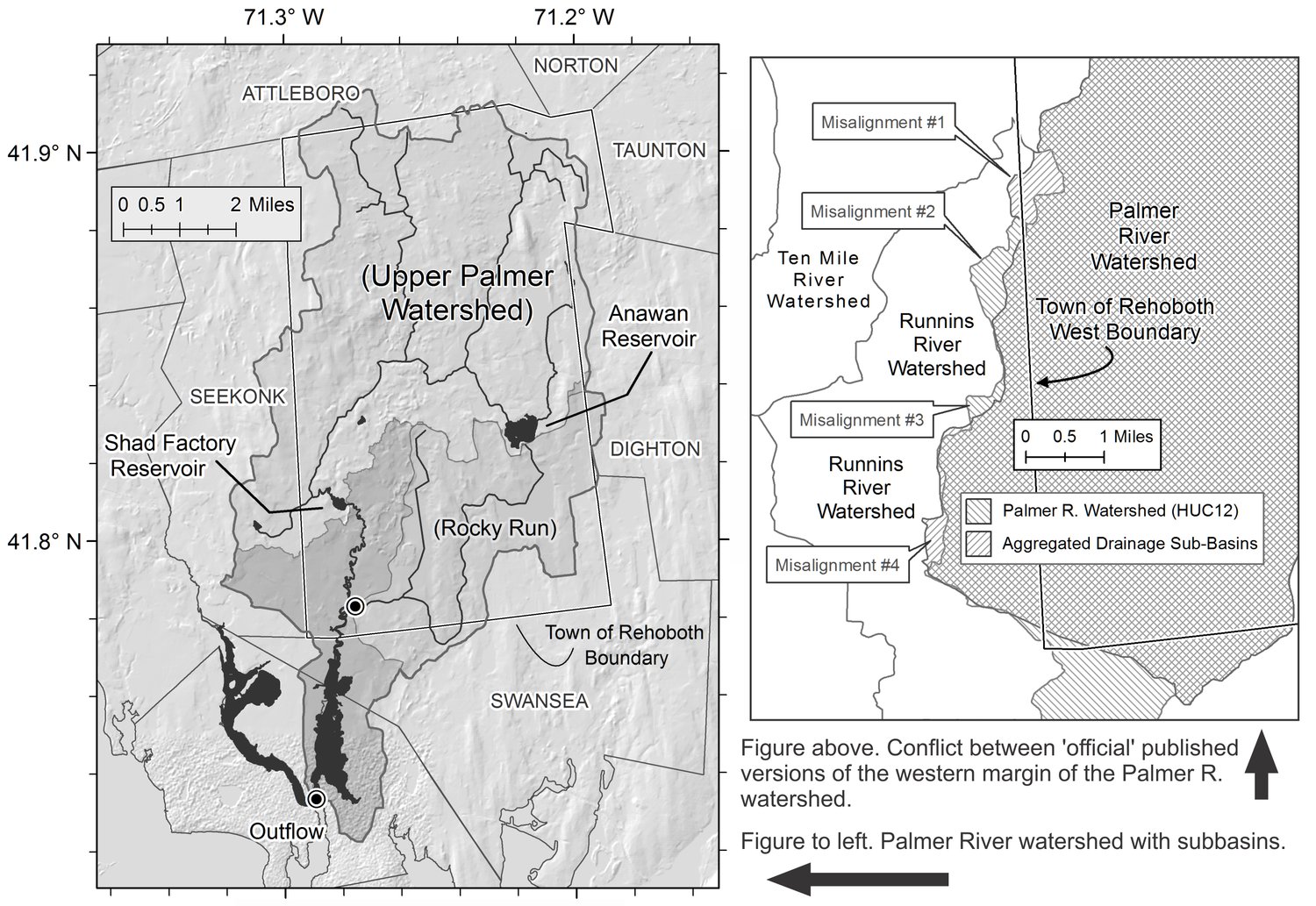 One of the great natural resources of the Town of Rehoboth is the Palmer River, and of course, its watershed. The term, "watershed", is intended to define that area of the land surface that collects the natural rainfall sustaining streamflow in the river. Both practically and technically speaking, a watershed is defined by its outflow point or by its contributing area to a collection point. Many a court case hinges on the strict application of this concept, and both the State of Massachusetts and local adjacent municipalities have used it to impose restrictions on lands and waters within our own town border. Our discussion here, however, will simply discuss boundaries, not the regulatory implications therein.

To begin, the map to the left in our figure shows the outflow point of our principal watershed being at the confluence of the Warren and Barrington Rivers. However, this watershed is subdivided into smaller watersheds or catchments. The Upper Palmer watershed above Shad Factory Dam drains into the Lower Palmer River watershed, into which flows Rocky Run Creek, which drains the Rocky Run watershed. Here the story gets interesting. Where exactly are the boundaries of the Rocky Run watershed? Old maps show that Rocky Run Creek once actively drained the landscape now occupied by Anawan Reservoir (aka Bad Luck Pond) one of our town's treasures. While the connection to what some prefer to call Anawan Pond has been lost on modern maps, Katie Eyer, a town member invested in a variety of water issues, has recently confirmed that this drainage still persists. This implies that the source region for Rocky Run Creek runs much farther north than most people might realize, and could include Squannakonk Swamp adjacent to New Street, including some of the 431 acres recently donated to the Rehoboth Land Trust by Otis Dyer. Of course, Anawan Pond drains principally to the west and north, complicating our notion of our upcountry catchments.

The bottom line is that we may not know the borders of our watersheds as well as we might think. A particular case of importance is the western portion of the principal Palmer River watershed, where its boundary wiggles in between Rehoboth, Seekonk and Rhode Island. One would hope that by going to official sources in the USGS, the EPA or MassDEP, that there would be one version of the watershed that all agree upon. The case is quite the contrary. As shown in the figure, the right, upper panel, there is significant divergence between two "official" versions of the watershed, both published under different titles by the MassDEP on its GIS website. In fact, close inspection of the topography on which the boundaries of the watershed are based, reveal that neither one is correct. Ted Ballard, our own town's oracle on all matters related to water, was aware of, and wanted to straighten out such discrepancies, but few seem disposed to pick up his mantle. Is anyone aware of who in town might be concerned with such issues?