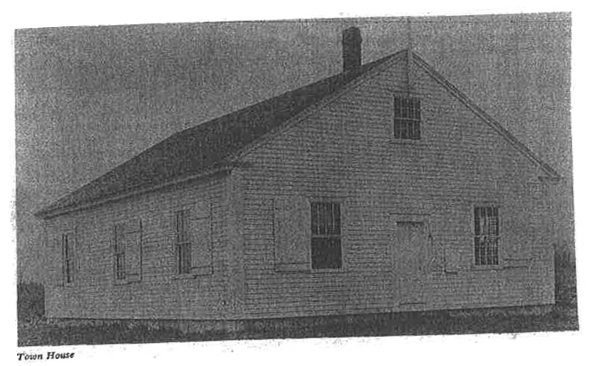 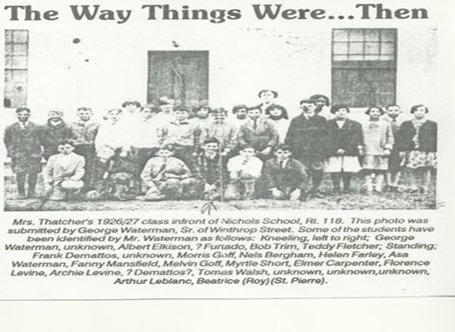 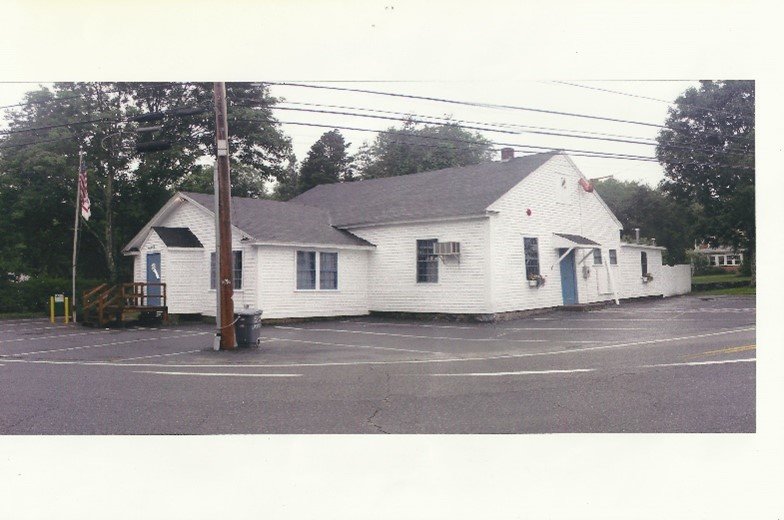 Photo taken by Bill Saunders around 2000 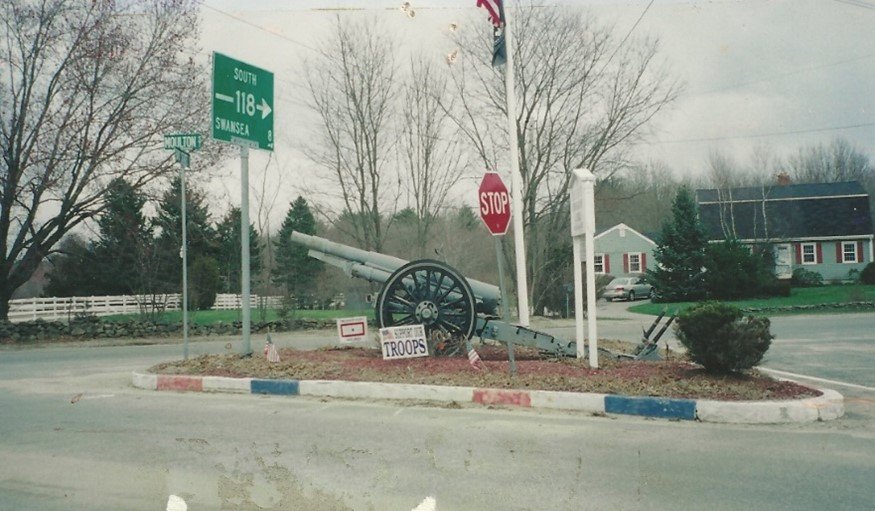 Photo by Bill Saunders taken in 2005 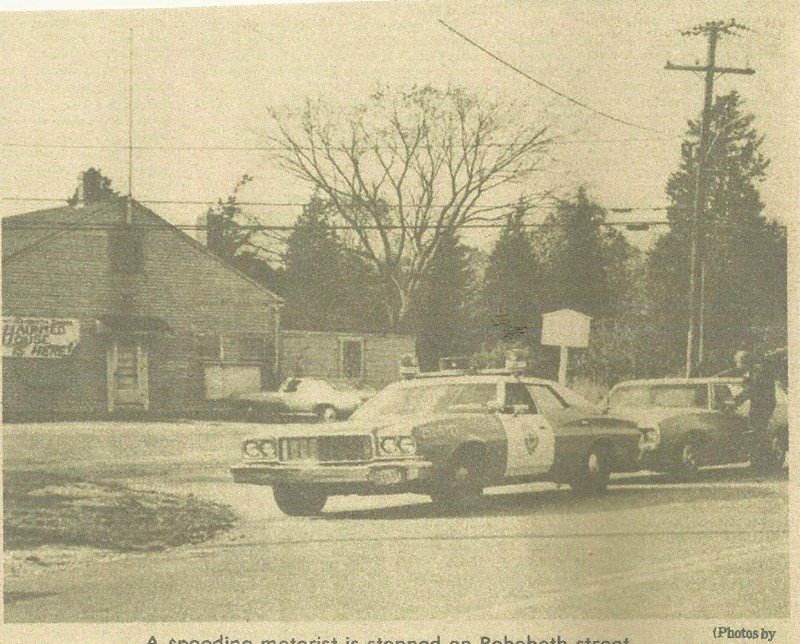 Photo taken by Frank Adams 1979 with Legion in the background 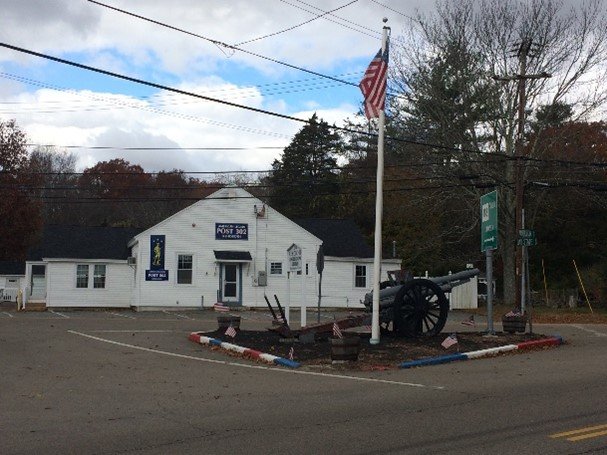 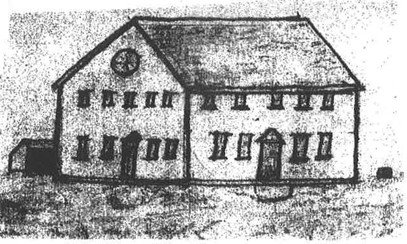 The building that has been known as “Town Meeting Hall” or “Nichols School” today houses the American Legion Post #302. This building was constructed around 1844 after the town committee approved the purchase of the lot on April 19, 1843 from Mr. Simeon Goff for a new Town Meeting Hall. The lot was recorded to be in the dimension of a square then known as the “Meeting Hall” or “Town Square” later to be known as “Legion Square”.

In 1922, this building housed a Grammar School called Nichols School that had the briefest history of all the schools seen today in Rehoboth. The school opened in 1922 specifically to accommodate 7th and 8th grades. It closed in 1930 when the Anawan School was completed at 53 Bay State Road. During those eight years, there was just one teacher – Mrs. Charlotte C. Thatcher, although Dorothy Beckwith taught for a brief period from April-December 1930.

Ten years after WW I ended in the spring of 1929, several Rehoboth veterans of World War I, decided that an American Legion Post should be established in Rehoboth. An application was forwarded to American Legion National Headquarters and upon favorable acknowledgment, the group was organized and given a temporary chartered on November 5, 1930, along with American Legion Auxiliary and both were permanently charted on November 10, 1931.

In 1930 a special committee met with the Selectmen and then at the Town Meeting it was voted and approved to sell them a recently vacated “Town Meeting Hall” building situated at what is now known as Legion Square, for consideration of $1.00 and the property was sold on April 6, 1931, with the provision that said property be reverted to the town upon expiration of the Posts charter.

In April 1934, the M-1906 4.7-inch howitzer located at the Legion Square was obtained through the interest of Congressman Joseph W. Martin and purchased by the American Legion Post 302 for $100.00 in 1935. The M-1906 howitzer is a noble relic of World War I and saw heavy service at that time. The cannon was been refurbished several times over. In 1997, extensive repairs were needed, thanks to Bill Humes, Lions Club and with local support; the cannon received a complete refurbishment.

Twenty years later during the winter of 2016-17 a Boy Scout Danny Furze earned his Eagle Badge for refurbishing the cannon by scrapping, patching, priming, and repainting while housed in J & J’s Materials maintenance garage on US 6. In 2019 the cannon was relocated from its previous location for 84 years on the island due to safety realignment of Bay State Road where is rests today.

The Legion incorporated on December 28, 1954, as the Rehoboth Post 302, American Legion, and Department of Massachusetts Incorporated.

In September 1962, Mrs. Pauline Peckham, the principal of Country Kindergarten that was once located at the corner of Brook and Morton Street, purchased Country Kindergarten, relocated, and moved to the American Legion Hall at 84 Bay State Road known as the “Nichols School House”. For 20 years the school had contributed to the education of over 700 children from Rehoboth, Swansea, Seekonk, Somerset, and Dighton.

In 1978 to 1980, the Johnsons family used the hall as a “haunted house” for Halloween before they moved their event behind the Blanding Library. The hall was even used as a storage area for the Rehoboth Lions Club even weddings were conducted inside.

Over the decades, the building came into total disrepair, there were no floors left, just dirt and a rotted roof. In 1989-90, a drive had begun to refurbish the historic building with members like John J. Flynn who put in over 3,000 hours gutting out the building and remodeling along with George Parent and others. The kitchen, bar, lounge and constructing an office had come a long ways with A & R Building Supplies giving credit to the Legion. By 1992-93 a debt of $25,000.00 needed to be taken care of, a fund drive went into high gear, one fundraiser starting the first annual golf tournament fundraiser on September 12, 1993 at the Hillside Country Club along with spaghetti dinners and breakfasts.

In the 1990’s, the Legion was open Wednesday’s & Saturday’s 12:00 to 9:00 PM to public events such as military whist and numerous suppers were conducted and enjoyed by friends from far and near. Legion members were glad to assist their Auxiliary making these affairs most pleasurable and profitable.

In 1994-95, the Legion received a Liquor Licenses from the town Selectmen after explaining to the town that the Legion need to bring in $800.00 a month for revenue to maintain the monthly overhead expenses and major renovations.

On April 7, 1998 the Sons of the American Legion received their charter, a group for descendants’ sons of Veterans who served this Great Country. The group assists American Legionnaires of Post 302 with events, conduct meat raffles, steak fry’s, help out with the Harvest Festival and other events. They have always earned their own income and dispense it with judgment and effectiveness to assist Veterans, Sons and to the local community like Rehoboth Food Pantry.

At the turn of the century, American Legion Post 302 became very active in the town of Rehoboth. The membership was very generous and contributed funding to many town organizations including Helping Hands, fuel assistance, the Police Association, and local little league. The post also donates funds to the Veteran's Services Office to assist local veterans in need.

2005 the Legion rebuilt the ramp in to comply American Disability Act, 2008 all windows and doors were replaced, 2009 the entire building was resided with new vinyl siding, 2010, the Sons constructed a Smoking area in the back of the building with John DuVally and others by laying paving stones throughout the back. They also installed a fire pit with overhead awning and constructed a new outside shed. A whole new roof and sheeting was replaced after major hailstorm in 2012 that caused a lot of damaged and most of this was covered by insurance. 2014-16 the Legion was engaged in relocating and installing new bathrooms along with remodeling the lounge area. In 2019, the town enhanced the safety along Bay State Road by redesigning the Legion Square’s intersection.

The American Legion Auxiliary offers two scholarships to new graduates from D-R Regional High School. The Auxiliary has always been known as one of the most progressive and stable units in the country. The Auxiliary gets high praise for their interest in the disabled, children welfare, civic duties as an Auxiliary’s’ responsibility. They have always earned its own income and dispenses it with judgment and effectiveness.

For many years the Legion and the Auxiliary have been instrumental in supervising and conducting patriotic exercises on Memorial Day in Rehoboth and Flag Day.